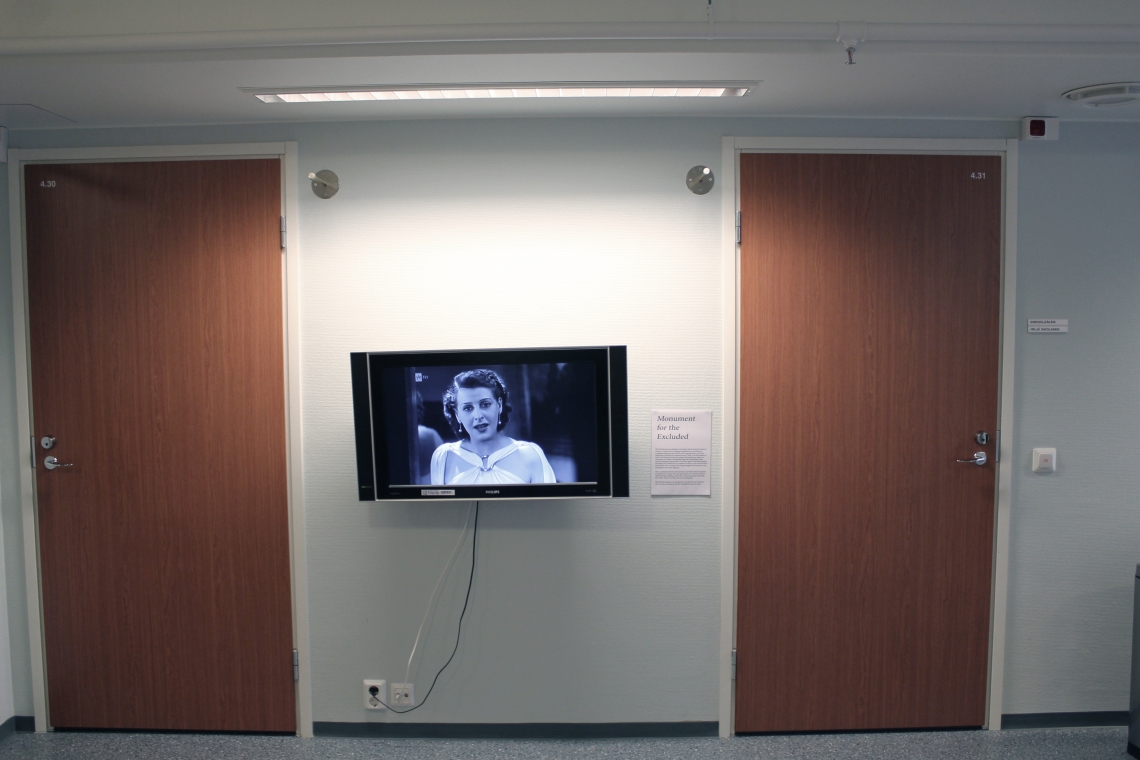 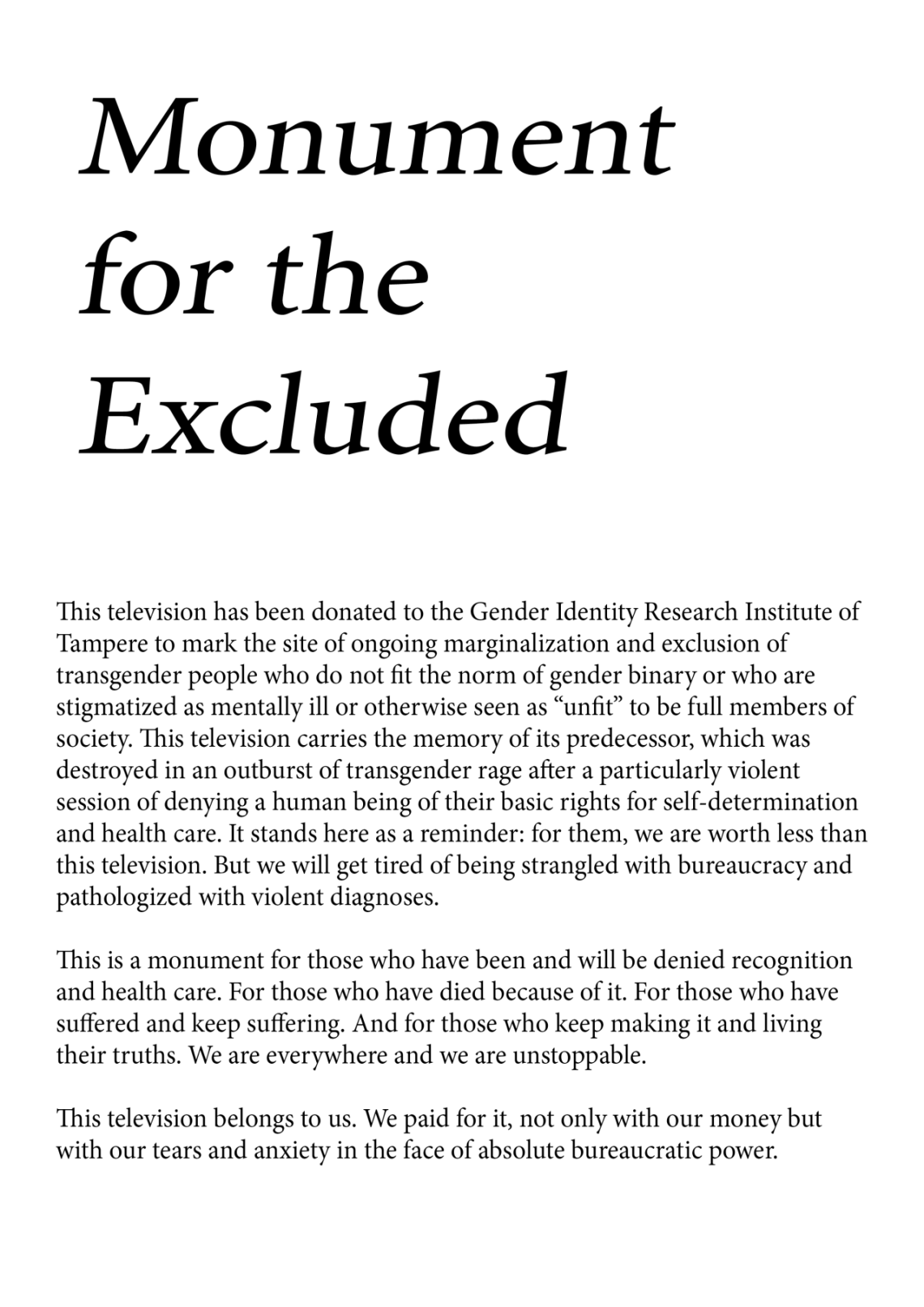 Monument for the Excluded
Conceptualizing the performative power of transgender rage

“I live daily with the consequences of medicine’s definition of my identity as an emotional disorder. Through the filter of this official pathologization, the sounds that come out of my mouth can be summarily dismissed as the confused ranting of a diseased mind.”

“Like the monster, the longer I live in these conditions, the more rage I harbor. Rage colors me as it presses
in through the pores of my skin, soaking in until it becomes the blood that courses through my beating
heart. It is a rage bred by the necessity of existing in external circumstances that work against my survival.
But there is yet another rage within.” (1)

A broken television is at the beginning of this intervention into the medical realm of transgender bureaucracy. An intact television is where we start from, to find its transformation to brokenness, and its rebirth as another identical television in the exact same spot. For a person who wouldn’t know what happened in between, there would be just a continuous existence of a television without the disruption of it being broken and replaced. For the broken television, there is no future as a coherent whole, there is only destruction and disassemblage. But the illusion of the undisrupted existence of the television in the fourth floor waiting room of building Z3 of Tampere University Central Hospital remains intact to anyone who hasn’t witnessed or heard of the happenings of february 11th 2015.

A spontaneous act of outrage can be a powerful opposition to structural power and violence. It can destabilize the hierarchy of decision-making and give its perpetrator their subjectivity back. This is what happened to me when i was faced with the pathologization of my identity.

Long story short, i had subjected myself to the investigation of the transgender authorities of finland, namely the Gender Identity Research Institute (this is my english name for it, i don’t care what its official name is in english) at the Tampere University Central Hospital, one of two places in finland that have the legal right to administer gender affirming medical care for transgender individuals. I was already ordering hormones online and taking care of my transition like any good transgender person would, but in order to get legal recognition and your passport’s gender marker changed, you need to undergo the official process of cross-disciplinary research by a nurse, a social worker, a psychologist and a psychiatrist that can take from six months to a few years.

Since being referred to them, i had waited for my first appointment for six months, then met a nurse twice in intervals of a couple months, then after a few months a social worker, another month or two till i met the psychologist, another month till i met her again, another two months till i met the psychiatrist and one more month till meeting her again and then a few months before my final meeting with all of them where my destiny would unfold to me. Through all this time i had no idea what was going to be their decision. And they make decisions about wether someone is transgender or not. They say it themselves: they have no way of knowing the gender experience of another person. So they concentrate on their patient’s psychological well being to determine wether the person is capable of going through the demanding process of medical gender affirmation.

Needless to say, withholding information about the most important decision in a person’s life, a decision the person has no part in making, constitutes an act of psychological violence. Withholding medical care from a person who might die without it constitutes structural violence.

Based on the Rorschach test i had taken in one of my meetings with the psychologist, she made the assumption that i had an unconscious sexual trauma. I hadn’t said anything that would suggest anything like that. She was directly trying to offer me a false memory. She said that i was sexually perverted, because i had seen a lot of vaginas in the inkblots. I told her that if you pour ink on paper and fold the paper, you most likely get a shape that at least in some parts looks like a vagina, that it was purely technical. She insisted i was hyper sexual even after i told her i wasn’t interested in sex. On top of everything she said i probably have borderline personality disorder, a serious mental illness i later learned should only be diagnosed together with the patient when it helps the patient. For me, it made me paranoid. I started seeing everything i do as symptoms of the disorder rather than my own actions. I also had to go through the possibility of childhood sexual trauma, which seems extremely unlikely.

So because of my alleged mental illness, i was denied recognition as a transgender person. And with that came the denial of legal recognition and public health care.

I kicked in the flatscreen TV in the waiting room.

They made me pay for it.

A crowd funding was organized and it was payed for collectively.

That’s the long story short. That’s not only my personal history, it’s also the history of many transgender people before and after me, who failed to present themselves as mentally and emotionally stable enough. Who failed to present them as trans enough in front of a jury consisting wholly of transphobic cisgender professionals that have the job of upholding the heterosexual matrix. Maybe they didn’t kick in a TV, but i’m sure they experienced the same frustration, rage and disappointment of being faced with absolute bureaucratic power that denies their existence.

I was applauded for my act of spontaneous rebellion. Many transgender peers said they wished more people would vandalize the Institute.

The western history of transgenderism is a history of exclusion, pathologization, invisibility, ridicule, incarceration and violence. Continuing today. That is the history dealt to us from the outside, from the cisgender community, from the heteropatriarchal knowledge machine, the media, the education system, religion and plain old familial values. But that’s the history of how we’re seen, it is not a history of our own. We have our own history, and it’s a history of fierce resilience in front of what seems like an impossible adversary: the whole world. As Susan Stryker writes in My Words to Victor Frankenstein, we are at war with nature itself. Nevertheless, our existence and our identities are real.

For the people whose TV i broke, it was only further proof of my mental disorder. For me, it was an act of reclaiming my subjectivity after being robbed of it. They decided i didn’t deserve my identity, a decision that should have been mine to make, so i decided they didn’t deserve their TV. Even-steven, motherfuckers.

A year after the incidence i returned to the place to rename it. I saw the new television, slightly tilted to one side. Perhaps someone had tried to break it, or perhaps it was just poorly attached to the wall. I posted a sign next to the television, renaming it as Monument for the Excluded.

A week later i receive a phone call from the Institute. It’s the psychiatrist i had to see there. She is sorry she has to make the call, explains that she was assigned to make the call and couldn’t refuse. Some people at the Institute have perceived my sign as a security threat. The psychiatrist doesn’t agree with that. I find it amusing and also i’m rather flattered that my art is a security threat to a violent state organization. But the phone call goes on and we talk about what happened a year before. I tell her to tell the psychologist how unprofessional she had been in offering me a false memory and suggesting a major mental illness based on two meetings and a rorschach test. To my surprise, she agrees and promises to tell my greetings to the psychologist. We go on to discuss my situation, she promises to send me instructions on getting all the information they have written about me and also encourages me to start the process again.

1. Stryker, Susan. 1994. My Words to Victor Frankenstein Above the Village of Chamounix: Performing Transgender Rage